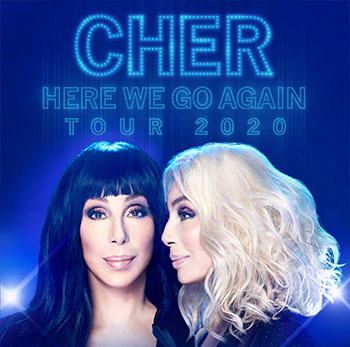 Launching her career in the 1960s as part of Sonny & Cher, the iconic superstar made unprecedented strides in what had long been a male-dominated industry and continues to reign supreme as one of the world's greatest entertainers. A worldwide superstar for more than five decades, Cher has sold more than 100 million records and conquered more challenges than a handful of other talents combined – recording, concerts, film, Broadway acting, television and directing. In 2018, Cher returned to the big screen with a stunning performance in the mega-hit film Mamma Mia! Here We Go Again followed by the release of her new album inspired by the movie, Dancing Queen.

**All onsale times are local time

Mar. 12, 2020 – With deep regret, CHER has announced the postponement of all concerts on the "Here We Go Again Tour" effective immediately. Currently held tickets will be honored for the new date, and no action is needed if fans want to keep their tickets and current seat locations.

Legacy Arena at The BJCC

Birmingham, AL This show is canceled and will not be re-scheduled due to impending renovations at the venue. Due to the unprecedented volume of cancellations, please note that you should expect to receive your refund in as soon as 30 days. Wed - March 18
Canceled